Exercising has a lot of benefits. You probably have read here and elsewhere about the benefits of exercising. But when exercising, would it be wrong if you take alcohol? What are the effects of alcohol on exercise?

This question is a critical one that this article would like to answer, and it’s a shocking one, but first, what does exercise do on our body.

Exercise and our body

Our body is mainly reactive. That means that it responds to actions that affect it.

Exercises are not something that one does without any effects. It has effects on your body. Different studies have shown these effects to be true. When you exercise, your heart starts beating fast. Its tempo becomes like that a salsa. The beats increase rapidly. You will begin to feel it.

While your heartbeat is increasing at a rapid rate, oxygen and nutrients would move fast around your body. This would provide your muscles energy. Your body temperature increases likewise your stroke volume, the amount of blood that leaves your ventricle at every heartbeat.

On the long run, you would get better health by exercising. Your body would be able to manage its oxygen, flow of blood and tone your muscles in a more effective way.

What alcohol does to the body

Worldwide, over 72 million liters of alcohol is consumed daily. This alcohol is in its purest form.

While more and more people take alcohol, it is not having that much positive effect on the body. As a matter of fact, in 2010, about $249.0 million was the cost of alcohol misuse. That amount equals another satellite to space. Just kidding though but consider that amount is being lost annually to alcohol misuse.

Alcohol has certain cycles in the body that when you take it for various amount of time, it will start having its effect on your body. Immediately you drink alcohol, 33% of alcohol gets into your bloodstream through your stomach lining.

Where do the other 67% of the alcohol go? Don’t get too excited they remain in your body and would still get into your bloodstream from your small intestine.

When the alcohol gets into your bloodstream, little by little, it will get into your body tissues through a process called diffusion.

It’s at this stage that the alcohol would start causing havoc on your body. From the obvious alcohol moment or getting high by the alcohol to even breast cancer, misuse of alcohol especially binge drinking is the worst idea ever.

There’s also a term called BAL, blood alcohol level which like blood sugar level is the concentration of alcohol in the blood. When you take more alcohol than your body can handle, your BAL will increase. That would put you in the path of danger.

The level at which BAL increases depends on factors like age, body composition, gender, health state, medication, and weight.

Thus, you have to be mindful of how you consume alcohol. 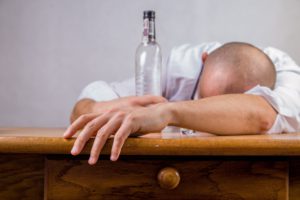 Exercise has a very grievous impact on the body.

In fact, a study by a University of Illinois at Chicago and Kaiser Permanente did research that shows that exercise can kill someone. This is especially true if the activity is a high-intensity one. Hence all the warnings you find on cardio machines.

Doctors even advice patience to check their arteries to ensure that the arteries are not blocked or close when exercising. A narrow artery might lead to cardiac arrest especially when in high-intensity exercise. The American Heart Association says that many people suffer cardiac arrests when they are working out.

You should know that when you take alcohol, the behavior of your body system changes that what is normal would become abnormal.

For instance, too much alcohol can mess with your brain that your brain would send the wrong transmitters to your heart and your heart would beat faster than usual, shortness of breath and even hallucinations. If you have been working out, you should know that they can lead to the worst experience in the gym.

Let’s look at some well-known effects of alcohol and see how it applies to exercise.

It’s no news that alcohol would make you lose coordination of your body.

Alcohol will make you lose balance. Most exercises that you would do in gyms would require you to lift weights or use your own body as the weight. When you lack body coordination, you might lead yourself to injury in the gym.

Injuring yourself would be one of the last things that you would want. Thus, it is essential that you avoid alcohol before starting calisthenics.

Alcohol inhibits the growth of your muscles.

Muscle growth is one of the significant benefits of exercising. When you exercise, your muscle will experience wear and tear that would need repair. Alcohol has all the factors that would ensure that your tissue doesn’t grow well.

You need quality sleep for your muscle to grow. But with alcohol, you would not be able to sleep well. Some people might feel sleeping longer means better sleep. That’s not always the case; it is the quality of sleep that matters.

Alcohol also dehydrates your body. When your body is dehydrated, nutrients that you need would have a hard time moving across your body. Alcohol can even lead to a migraine because the water that your brain needs, it did not get.

Alcohol can also disrupt your muscle growth through the way your muscle synthesize protein. Since alcohol is absorbed before any other nutrients, it will cause worse digestion of the protein.

It’s more than expensive to keep up a lifestyle of alcohol.

Not only the amount you spend on buying the alcohol but other times that alcohol might lead to an economic loss.

Take for instance, at the gym; you decide to guzzle a bottle of alcohol. Except when the gym is in your house, you have two options. Either you find someone to drive you home, or you get to lodge a hotel or a guesthouse to get over the alcohol. All this seems a little extreme of course, but I’m trying to emphasize problems you might run into.

You know you would be breaking the law if you decide to drive yourself when drunk. That itself is even more costs.

So you can save more money when you abstain from alcohol when exercising.

You have a higher risk of dying when you’re exercising under the influence.

When you take alcohol, the pressure of your heart would be unusually higher than average. Coupled with exercise, you might be putting yourself up for danger – cardiac arrest.

It’s a no-brainer that your breathing pattern changes when you’re drunk. This irregular breathing cannot help you exercise correctly because your body would need more oxygen. This could lead to weakness and even dazzling.

You would not like to go to exercise, and you’ll become the laughing stock of how you nearly fell when exercising because you’re drunk. What about you’re alone at the gym with no one to see when that happens?

Do you know what that is? Won’t you be afraid people say it because you won’t hear it?

Exercising is a social endeavor. The more time you spend exercising, the more you would understand how exercising, and your body works. Alcohol would lead you to poor social judgment. And this is not about being judgemental. When you’re bad associating with people, it could lead to losing interest in exercising. That would be bad for your growth; you would not want that. 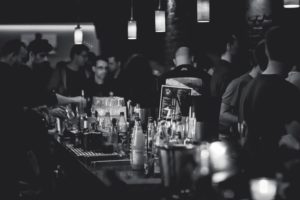 Alcohol and exercise are two completely different things and they don’t go well together. You can do the two of them together if you do one occasionally.

Exercise has been shown to be good for your health, and it cost not much. Most of the time all you will need is just your time. Sometimes, you would pay for a gym membership. But with calisthenics, all you need is a good coach, could be anyone, to show you the right steps to take so you would not build wrong exercising habits.

Alcohol, on the other hand, requires you to spend money.

If all you care about is results, you should go for exercise and forget about alcohol for life. It would waste your time and efforts that you’re putting into training. You should make the right choice. I say have a healthy relationship with alcohol.

Let me know do you consume alcohol? Or did you stop drinking it all together? Sometimes I consider quitting altogether. Let me know your thoughts in the comments below.